New Delhi (CNN)When India’s Prime Minister Narendra Modi concludes his three-day visit to Washington on Wednesday, he will likely reflect on how the relationship between the world’s two biggest democracies is becoming ever closer, a step towards fulfilling U.S. President Barack Obama’s prophesy that India and the United States would form “one of the defining partnerships” of the 21st century.

At the very least, Modi deserves credit for generating an impressive amount of air miles. This week marks his fourth U.S. visit since assuming office in 2014. It is also the seventh time he has met Obama.
But there is an important first this week too: Wednesday will mark the first time Modi has been invited to address a Joint Meeting of Congress in the House Chamber — an honor bestowed on just a few world leaders every year.
Wednesday’s address to Congress will complete an unlikely turnaround for Modi, going from outcast to prize in just over two years.
The clouds hanging over Modi’s reputation date back to 2002 when he was Chief Minister of the western state of Gujarat. More than a thousand Muslims were killed by rampaging Hindus in the final act of an ugly spate of riots. Human rights activists have long alleged that Modi was complicit; India’s courts have been unable to prove any truth to those claims.
Reacting to the controversy over Modi’s alleged role, U.S. officials denied him a visa in 2005 on the grounds of a little-used clause of the Immigration and Nationality Act barring foreign officials from entry if they were deemed responsible of what the Act calls “violations of religious freedom.”
When Modi became Prime Minister the clause was rendered irrelevant. The leader of the world’s biggest democracy was simply too important.
ALSO READ: Does India like Donald Trump?

On his first visit to New York Modi stunned the city by drawing a crowd of twenty thousand supporters to his speech at Madison Square Gardens. Modi had arrived. He appeared at another rally in the company of ‘Wolverine’ actor Hugh Jackman. In subsequent visits he was seen with Facebook’s Mark Zuckerberg and SpaceX founder Elon Musk.

Come Wednesday, the rehabilitation will be whole. Modi is now known around the world mostly for his electrifying oratory, for being decisive on foreign policy, and for talking up domestic successes – even while some of his main projects are stymied by political gridlock. 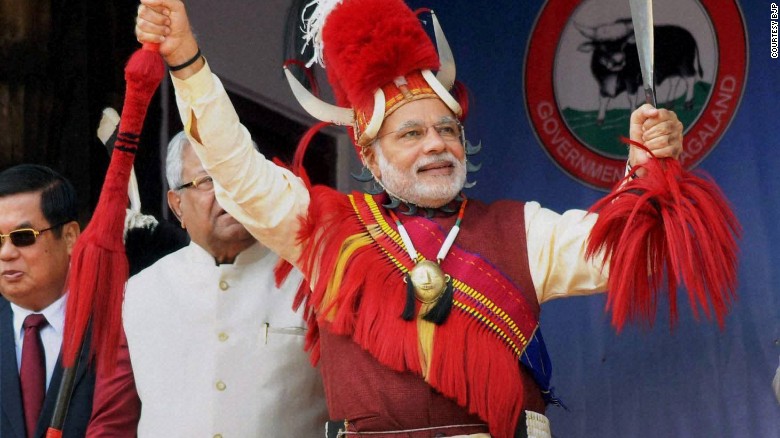 Nagaland – Indian Prime Minister Narendra Modi wears a traditional Naga warrior headgear at the Hornbill festival in Nagaland. Horbill, a bird admired greatly by locals in Nagaland, is symbolically used in these traditional tribal headgears. These headgears are considered symbols of power, position and status. It can only be worn if one has inherited or earned the right.

This is largely a win-win visit for both leaders.
For Obama, India could be seen as a foreign policy success, far away from the crises of Syria and Libya, the unease with Russia, or the competition with China. New Delhi has emerged as a partner in the Indian Ocean and a hedge against China’s ambitions. U.S.-India ties in defense, intelligence sharing, trade, and investment have gotten stronger. A steady stream of U.S. CEOs make their way to India every month, looking to cash in on a country that is increasingly seen as a rare growth spot in a bleak global economy.
Inviting Modi to Washington is Obama’s way of sealing one part of his foreign policy legacy.
As India’s Foreign Secretary S. Jaishankar put it to reporters at a briefing in New Delhi last week, there are very few world leaders Obama wants to see in his remaining months in office. Modi is clearly one of them.
Modi, meanwhile, can’t get enough of the United States. Modi’s global travels get unprecedented coverage at home, but none more so than his visits to America. The Indian media has often trumpeted the so-called chemistry between the two leaders, branding it a “bromance.” In reality, Modi has been wise to be effusive in public while keeping private any lingering resentment and embarrassment from his erstwhile travel ban.
ALSO READ: A look back at Narendra Modi’s first anniversary in power
For Modi, the benefits of a strong American friendship are clear: being aligned closer to Washington means he can attract more business and trade, which has always been his top priority. As the Brookings Institution’s Tanvi Madan points out, U.S.-India trade has jumped from $60 billion in 2009 to $107 billion in 2015; sales of U.S. defense equipment to India now reach $14 billion, up some 50-fold from a decade ago. The U.S. is also expected to help India join the Nuclear Suppliers Group (NSG), a club of countries trading materials for nuclear energy.
Crucially for India, which has in the past flirted more with the Soviet Union than the United States, New Delhi’s friendship with Washington hasn’t cost it its own independent views. While cozying up to the White House, India has continued to forge ahead with investments in Iran, for example, such as its recent development of the Iranian port, Chabahar. 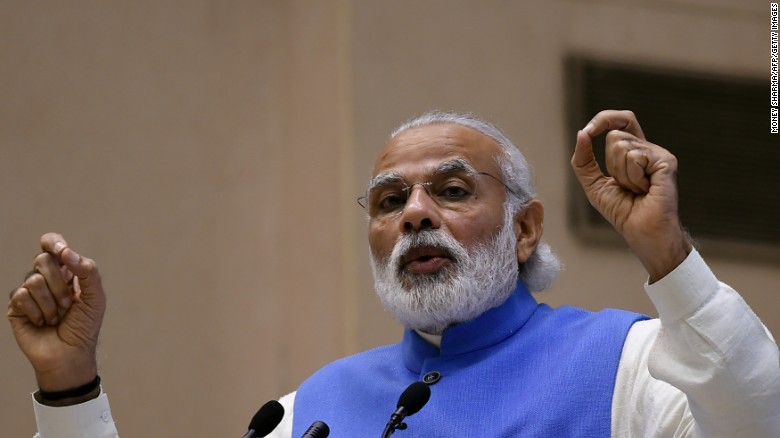 As with many pow-wows between big leaders, don’t expect too much of substance to emerge. This week is more about symbolism and ironing out plans long in the works, such as military cooperation and minor shifts in energy policy.
It is significant that Modi will be arriving in the U.S. from Switzerland, and traveling onwards to Mexico — both are countries that are members of the NSG, and crucial to rallying support for India’s bid to join the group.
America’s support will be vital too. In return, Obama may push Modi to advance his climate change agenda following the Paris Agreement signed in 2015.

While Modi is clearly no longer an outcast in Washington, he may yet have to answer some uncomfortable questions. He is expected to meet with lawmakers on Capitol Hill, some of whom have been vocal about Modi’s human rights record, including what many see as a rising climate of hostility towards Muslims in India.
More publicly, a congressional commission will hold a hearing on Tuesday examining human rights in India. The session is expected to take place right as Modi and Obama meet.
Modi will not have a chance to project beyond Obama just yet. This will likely be Modi’s final meeting with President Obama as the world wonders who Modi’s next counterpart will be.
Facebook
Twitter
Pinterest
WhatsApp
Previous articleModi, Obama welcome work on nuclear reactors in India
Next articleToronto shooting victim identified by father as Sukh Deo, former Vancouver gangster