Jagtar Gill, 43, was found dead in her home in January 2014. The Crown contends that her husband and his lover “hated” her and conspired to kill her.

DNA obtained from a bloody knife and blood found spattered throughout the Ottawa home of Jagtar Gill after she was stabbed and bludgeoned to death matched that of her neighbour Gurpreet Ronald, an Ottawa court heard Wednesday.

Ronald and Gill’s husband, Bhupinderpal Gill, are each charged with first-degree murder in Gill’s 2014 death.

The Crown alleges the co-accused, co-workers at OC Transpo, were in a longstanding affair and had conspired to kill Jagtar Gill. 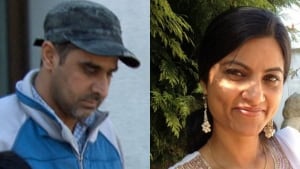 Bhupinderpal Gill, left, and Gurpreet Ronald, right, have been charged with first-degree murder and have pleaded not guilty. (CBC)

The two accused have both pleaded not guilty and are being tried together, but are being defended by different lawyers.

On Wednesday Ottawa police Const. Julie Dobler, a forensic identification expert, continued to take court through the evidence she and her team found in the Barrhaven home where Jagtar Gill’s lifeless body was discovered on Jan. 29, 2014.

Dobler said on Feb. 6, 2014, police turned over a number of blood-covered exhibits seized from the family room and from other parts of the Gill home to the Centre for Forensic Science in Toronto to obtain a DNA match. 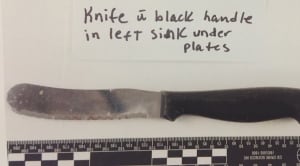 One of three blood-stained knives police say they found in the sink of the Gill home. (Ottawa Police Service)

The DNA analysis came back in March, showing the bloody, serrated knife found in the Gills’ kitchen sink, blood found on the baseboards, doors and carpet on the home’s second floor, and blood found in the master bedroom bathroom all matched Ronald’s DNA sample.

Blood found on a finger torn from the blue latex glove found next to Gill’s body also matched Ronald’s, Dobler testified. A box of similar-looking blue gloves was seized from a kitchen cupboard in the Gills’ kitchen.

Dobler said the analysis determined the chances of someone else sharing the same DNA profile as Ronald’s was one in one quadrillion (or one followed by 15 zeroes).

When police questioned Gurpreet Ronald several days after the killing about the bandage on her finger she said she’d cut it chopping vegetables. 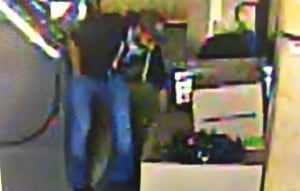 A still image from a police camera police set in the basement of the Gill home shows Bhupinderpal Gill checking on a weightlifting bar on Feb. 6, 2014, police testified. The bar was a replica placed by police after they found one with blood on it in a box in the basement. (Ottawa Police Service)

A day earlier, Dobler had walked the court through the evidence found in the home, including a metal weightlifting bar with blood on it found in a box in the basement.

Dobler said Wednesday she was “definitely surprised” to find the potential weapon stashed in a box in the basement.

That bar was seized by police and replaced with an exact replica, and police sought a warrant to install a video camera in the basement to see what would happen to it. Police covered the bar with sheep blood in place of the human blood.

Some time after the killing police followed Bhupinderpal Gill to Cedarview Road where they say he threw the replica bar into a wooded area, court heard.

Relatives of victim disturbed by photos of body

On Tuesday more than two dozen family and friends of Jagtar Gill watched the Crown go through graphic photos of the deceased, and some could be heard gasping in the courtroom at the disturbing images. 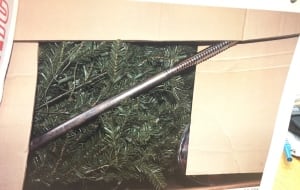 Ottawa police Const. Julie Dobler said they found this blood-stained weightlifting bar inside a box on top of a fake Christmas tree. Police replaced it with an exact replica. (Ottawa Police Service)

Jagtar Gill’s sister, Harjinder Sidhu cried and at times put clenched fists to her face as the Crown presented the grisly photos of Gill’s body. A young woman beside Singh held her hand.

Gill’s father, Ajit Singh Mann, broke down and left the courtroom as the photographs were shown.

Crown prosecutor Jason Neubauer told Ontario Superior Court last week during opening statements that Ronald and Bhupinderpal Gill were lovers for a year and a half and that they conspired to kill Jagtar Gill, whom they both hated.

Phone records show the co-accused spoke for about 48 hours during hundreds of calls in the 28 days leading up to the killing and met each other repeatedly, Neubauer told court.

On the day she was killed, Neubauer said, Gill was at her “most vulnerable” following abdominal surgery the day before.

Her husband and daughter left the home that morning to buy anniversary presents, and that is when, the Crown alleges, Ronald entered the home and bludgeoned and stabbed a weakened Gill.

It was noted that wounds on Gill’s forearms and hands indicated she tried to defend herself from the attack.

On the day of the killing, phone records show the two accused spoke four times and met at a nearby grocery store after Gill was dead, where they spoke briefly and left in separate vehicles.

Facebook
Twitter
Pinterest
WhatsApp
Previous articleCo-accused in murder trial were in long-standing affair, conspired to kill, Crown contends
Next articleCanuck the Crow swoops off with knife from Vancouver crime scene